Prince Needs to Start a Revolution 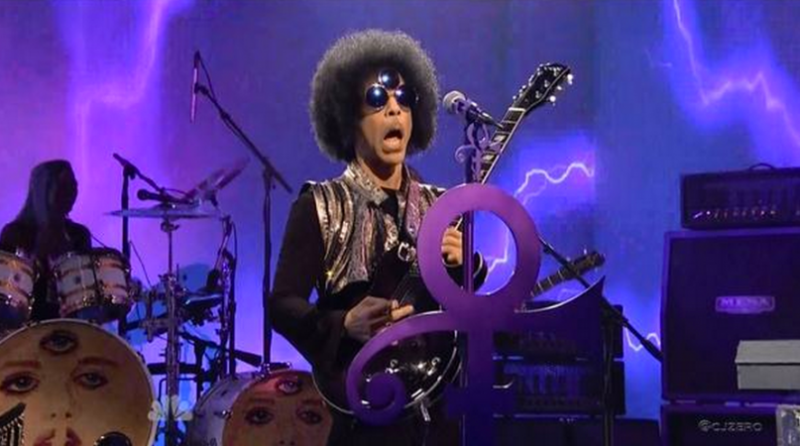 People are still talking about Prince’s 8 minute set recently on SNL. And for the record, it was banging! The Purple Bad One continues to make new music and show performers, young and old, what a master craftsman looks like. Prince is the only artist I can think of, where fans will listen, and jam, to music they’ve never heard before. Sure, we love the hits, but mostly, we love to see this man and his band perform. Period!  But what I admire about Prince also makes me sad. He’s one of the few African Americans who still play in a band.

From the Revolution to The New Power Generation to whatever Prince has called his band in every subsequent or current iteration, he composes music, plays multiple instruments, sings and dances in his band. Ok, maybe a little less dancing these days, but I digress. The joy of watching any Prince performance is knowing you’re going to watch a legendary front man, with live musicians, playing their behinds off, all while you get your groove on!

Unfortunately, he’s one of the last.

Survey the music charts and look for African American bands. They’re nowhere to be found. If I had to pull names off the top of my head, I can call out The Roots, who I love, but they’re busy holding down The Tonight Show not topping the charts. My man Lenny Kravitz just dropped a new album and Strut is my new jam. Lenny is also very similar to Prince in that they both play multiple instruments and both have a definite rock and roll flavor with a funk groove. Plus, between the two of them, I think they’ve made it their mission to keep every fine woman drummer and guitar player employed.

But that’s the end of my list. I can’t think of another true band.

The days of Earth, Wind and Fire, Con-Funk-Shun, The Ohio Players, The Bar-Kays, The Commodores, Brass Construction, Stevie Wonder, A Taste of Honey, The Brothers Johnson, Parliament…ok you get the point. And that’s off the top of my head. These were not exceptions, or unusual and all of these bands made hits.

Why? What happened? Where did all the bands go? Is it the record labels fault?  Are dwindling or nonexistent A&R departments to blame? Is this just a, “Sign O the Times”? The truth is surely a combination of factors. But if I had to point my finger at any singular cause, it would be Rap.

I’m not blaming Rap music. I know that’s a popular thing to do in many circles. As I’ve suggested, there are multiple reasons. But Rap as a genre, has few barriers to entrance and the possibility for success appears easy. It’s easy to sample a song. Anyone can publish themselves thanks to YouTube, MySpace and multiple other outlets on the web and you write two lines. For example:

Get loose
Get loose in the house

Now I put that on top of Zapp’s “More Bounce To The Ounce” and presto! I have a hit! I’m receiving my Grammy from Taylor Swift and Keith Urban and thanking all of my fans. As ridiculous as that sounds, it’s not that far from the truth. And if that’s all it takes, why spend YEARS learning to write songs and play instruments?

Rap music, which I love, has changed the landscape of the world in many profound ways. But at the most basic level, people who write lyrics, not music, dominate Rap. How many Rap “hits” are just new lyrics and a rearrangement of “More Bounce To The Ounce”? For the most part, Rap hasn’t had new music in decades. And why should it? Bad lyrics can generally be overlooked for a hot groove. Just look at all of the AWFUL, and I’m not talking bad, I mean AWFUL Rap songs who’s “stars” would never be considered a lyricist. But they have a hit record because the beats and the hook are what sell.

Conversely, take Jay-Z, Nas, Biggie, KRS-One, Wu-Tang, NWA, Lupe Fiasco, Eminem,  etc. all have hits with banging tracks. But they all also have hits that you may never dance to, but they’re hits because the lyrics they spit were pure poetry. It takes time and a commitment to craft to become a master lyricist. It similarly requires time and a commitment to craft to become a musician. However, if you can find success as a bad rapper, stringing two words together on a loop to music someone else wrote…why not? What you can’t do is go out on a stage, playing instruments badly and move a crowd. Unless you’re wearing a raincoat or some other protective gear, because it can get ugly very quickly.

Another important component to consider is the assault on funding of the arts in our schools. That’s where I learned to read music, in school. Music class is where I learned FACE and E-very G-ood B-oy D-eserves F-udge. It was a required class. I also chose to play in the band as an elective. These are options that, sadly, are not available to most African American children due to budget cuts in school systems across the country.

I’ve got my eye on Unlocking The Truth. Three young men from Brooklyn who are not only in a band, but playing heavy metal rock and roll. Not since Living Colour (the band, not the Wayans show “In Living Color”) have I seen an African American band playing 100% rock and roll.  They’re not topping the charts…yet…but they’re young, talented and I hope a sign of resurgence in black bands.

That’s why I need Prince to lead a revolution. Not one with Wendy, Lisa, Doc and company. Their status in music history is secure. I’m talking about a movement of mentoring, cultivating and growing young African American musicians. Understandably, Prince may have his own idea about how best to utilize his time.

But how cool would that be?