I’m Not At The Movies 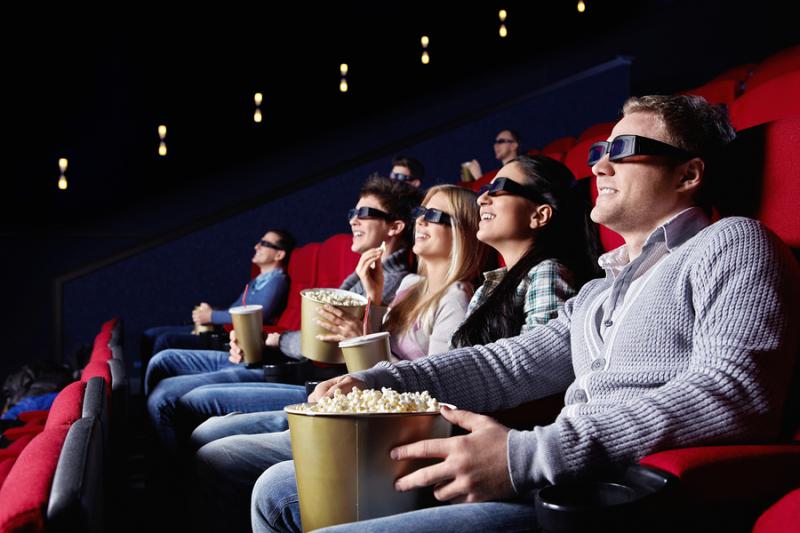 I’m a movie fanatic. I love film. I love the whole experience of going to the movies. As a rule, I never eat popcorn. I can’t watch a movie without popcorn. As a rule, I don’t eat candy…anymore. I can’t truly enjoy a film without Milkduds or M&M’s. There’s no greater example of me reacting like Pavlov’s dog than when I walk into a cinema.

I never watch previews. Never. I don’t watch them on television, I don’t look at ads online, I avoid billboards and I turn off the radio if a promo comes on. I wear my earphones in the movie theater, with the volume up on my IPod and don’t look at the screen before the feature. I know this may seem a bit extreme upon initial consideration, but hear me out.

Every preview will show you the end of the movie. Every one. Not only will you see the big explosions, the best jokes, and the most intriguing situations, the previews will do everything short of telling you…what you ultimately found out in the “Sixth Sense” or “The Usual Suspects”. Simply put, they ruin the film.

I know what I like. There are directors, writers, actors and producers that tell stories well and take full advantage of the visual medium of film. They’ve earned my trust and will get my money. George Clooney, Martin Scorsese, Denzel Washington, Russell Crowe, Morgan Freeman, Steven Spielberg, Guillermo del Toro, Chris Nolan, Christian Bale, Meryl Streep, Ed Norton, Lawrence Fishburne, Sean Penn, The Coen Brothers, Brad Pitt, Clint Eastwood, Steven Soderbergh and James Cameron are just a few names that come to mind. When any of these talented artists, or better yet, any combination of them, are making a film, that’s all I need to know. I’m going. Don’t tell me another word. I don’t want a hint about the plot or who else is involved. When I arrive in the theater, I’ll find out.

A perfect example of this is “The Devil Wears Prada”. I knew Meryl Streep was staring in the film and that’s all I needed to know. When the film started, I thought Meryl was playing the devil in some sort of crisis of faith film, and when the devil appeared, the lost soul was going to be shocked that…the devil wears Prada. Needless to say, that was nowhere close to what the film was about. But I enjoyed the film not only for Meryl’s performance and Stanley Tucci, who’s always great, but I was introduced to Anne Hathaway. That was also the first time I saw Simon Baker, which led me to watching “The Mentalist” on television.

All of that said, to say this…I haven’t been to the movies in months.

I’m swamped with work, family and trying to maintain my workout regiment. It’s hard to find a film that’s less than 90 minutes long. Two of my favorite directors, Jim Cameron and Chris Nolan don’t know how to make a film less than three hours. They’re usually three good hours, but three hours just the same. I can’t find the time. The last two films I saw were “The Edge of Tomorrow” and “Guardians of the Galaxy” over the summer. Both were fantastic by the way, but it’s almost Christmas! I wouldn’t be surprised if a Goldman Sachs analyst blamed lower 2014 box office revenue directly on me.

As much as it pains me to miss dozens of films that I want to see, another explanation, if not a justification for keeping the $13 per film ticket and $18.50 for a #2 combo (popcorn, candy and bottle of water) is the phenomenal storytelling available “through” my television. I say through my television because great content is no longer being produced solely by the major networks and cable channels. Now, Amazon, Yahoo, Hulu and the premiere new media company, Netflix, all have my attention. My DVR and Netflix queue are completely packed with great shows.

“The Good Wife”, “Elementary”, “Sleepy Hollow”, “Gotham”, “Castle”, “The Flash”, “Arrow”, “Survivor”, “The Amazing Race”, “Grey’s Anatomy”, “House of Lies”, and “The Mentalist” are just a few of the network shows that have one or more episodes waiting for me to caught up. On cable, sadly “Boardwalk Empire” just concluded but the final season of “The Newsroom” has just begun.

On Netflix I watch Sherlock, House of Cards, Luther, documentary’s and often whatever it suggest I watch based on one of my other shows.

I have yet to watch and episode Game of Thrones, Walking Dead or Dexter just because I don’t have the bandwidth.

There are so many gifted people doing great work in television it has made not going to the movies…bearable. Nothing can replace the big screen. There’s an electricity in the air of a packed IMAX theater, at midnight, with super fans hyped up to be the first to see a movie like, “The Dark Knight” in 3D that’s phenomenal and impossible to recreate at home. That’s an experience.

But the bottom line is storytelling. Tell me a great story with twists and surprises. Give me complex characters, put them in difficult situations and let me watch them do extraordinary things. That’s what I want and television is giving many of the best and brightest talents an opportunity to do just that.

Sure, there’s plenty of bad television. But that’s why DVR’s and Netflix have become game changers. They allow the customer to be their own CEO of their channel. This becomes a complex business conversation that I can save for another day. For now, I’m just focused on the availability of great content that has contributed to my missing films in the theater.

I’m speaking as a consumer. It’s an interesting position for me because I’m in the entertainment business. Many of my friends, peers and business colleagues work in film and television. Some of the most enjoyable conversations I have are at the grocery store when I bump into someone who’s working on a show or film I’ve seen and we can talk all about it. Far too often I seen folks who work in film and now I have to say, “it’s on my list of things to see.” I just don’t know when.

I need to see “Gone Girl”, “Birdman”, “Interstellar”, “Beyond the Lights”, “Fury”, Selma”, “John Wick”, “Lucy” and those are just the films still in the movie theater. I need a “staycation”. I’ll take a vacation, stay at home and spend all week at the movies. But until that happens, let me get my remote.